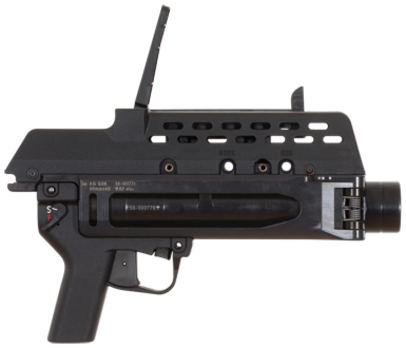 This combination gives the user added effectiveness against unarmoured or lightly armoured area and point targets at ranges up to 350 m (depending on the ammunition). The AG36 fires 40 mm x 46 (low velocity) grenades of any length – including HE rounds, impulse rounds, CS gas cartridges, smoke grenades and other type of ammunition. All of the grenades for the american M203 and MM1 grenade launchers can also be used.

The AG36 can be deployed as a stand-alone grenade launcher, independently of any primary weapon. Therefor the buttstock element is pushed into the add-on grenade launcher and locked in place using the G36 locking pin mount. The buttstock is available as an accessory.

The GLM 40 mm add-on grenade launcher (LV) has the same function, characteristics and handling as the AG36. Developed for use on the HK416/HK417, it can also be mounted on M4/M16 or C7/C8 type assault rifles by means of a special adapter. As a scalable system, through the use of optional accessory components the GLM can also be carried as a stand-alone weapon (SAM GLM) independently of any primary weapon.

With the addition on a retractable buttstock, the GLM can be used as a stand-alone launcher. An integral MIL-STD (Picatinny) rail also allows a folding vertical foregrip to be added. In this configuration, GLM can be used effectively as a “grenade pistol” in confined spaces without the buttstock attached.

The HK169 was developed by Heckler & Koch as a state of the art successor of the well-known HK69 to meet all the requirements for modern warfare or law enforcement applications. The 40 mm LV stand alone grenade launcher is very effective against lightly armoured point and area targets at ranges up to 350 m. In its role as a less lethal launcher the HK169 is ideally suited for all types of law enforcement tasks. 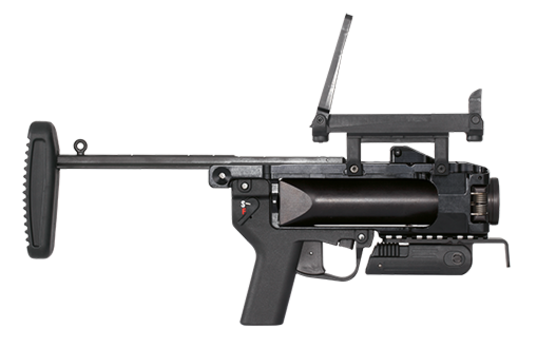 The HK269 is an enhanced development of the GLM/M320 in calibre 40 mm x 46 (low velocity) with the option to unlock the barrel either towards the left or right. The interfaces to mount it on assault rifles and the option to use it as a stand-alone weapon remain unchanged. Application range of up to 350 metres. The HK269 is suitable for both lethal and non-lethal ammunition.

Increasingly, armed forces worldwide require a universal fire support system. In the past, armies have depended on heavy machine guns or add-on grenade launchers, but neither is an ideal solution. With normal small arms, effective aimed shots become less likely as the range increases. Moreover, conventional rifle ammunition provides no fragmentation effect, and is largely ineffective against armoured vehicles. Add-on grenade launchers, on the other hand, have the disadvantage of a relatively low rate of fire.

In order to close this effectiveness gap in infantry weapons, Heckler & Koch has developed a long-range grenade machine gun with a large indirect area of effect – the GMG in calibre 40 mm x 53 (high velocity).

Thanks to its high rate of fire, combined with the fragmentation and anti-armour effect of the 40 mm rounds, the GMG combines the advantages of machine guns and grenade launchers. What is more, it provides high operational flexibility. It can be used either on a tripod as an infantry weapon for engaging ground targets, or installed on a mount for use on land vehicles or patrol boats. Integrated safety features and well thought-out mechanical elements make the GMG what it is: one of the most technologically advanced grenade machine guns in the world.